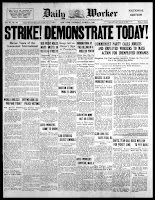 Today is May 1st.

May first is well known as May Day, or International Workers' Day. This day is typically marked by workers' rights demonstrations organized by Socialist and Communists. It is arguably a high holy day for leftists. The history of this event goes back quite some time but rather than turn this into a tedious history lesson, suffice it to say that 1890 was probably the first major international demonstration and in 1891 May Day was formally recognized as a an annual event by The Second International, an organization of Socialist and Labor parties.

Just a few weeks later Pope Leo XIII issued Rerum Novarum, an encyclical on the rights and duties of capital and labor. This document resonates deeply with us. Not that it is necessarily agreeable in the line by line reading (it was written in 1891 for God's sake) but it clearly illustrates the dilemma of the thinking Christian. That dilemma is simply this, to recognize something good and true in pieces of the rhetoric from both the Left as well as the Right, and to find a home in neither, as another allegiance makes that impossible. This letter boldly proclaims the rights and the value of the worker, the demands of justice, the duties of employers to the workers, and it also defends the rights of private property and clearly opposes the aims of the socialists. It is in one sense, on nobody's side, and I would also argue that it is committed to loving both sides. It is fundamentally a call to unity and justice and a solid example of Catholic social teaching. 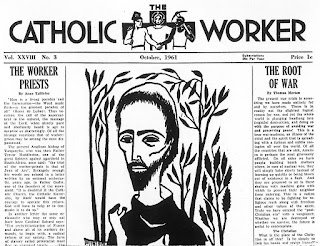 On May 1st, 1933, in the midst of the depression, Dorthy Day and Peter Maurin, heroes and examples to our community, as well as the founders of The Catholic Worker, published and distributed the very first issue of the paper. The Catholic Worker paper was intended to counter the Communist/Atheist paper known as the Daily Worker and provide a forum for Catholic social teachings and the encyclicals of the popes, such as the letter referenced above. 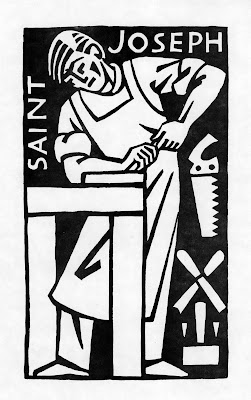 "Dorothy Day did not believe in the works of Lenin or Marx, but in the works of mercy. The Catholic Worker was not started as a socialist movement, but as a movement to bring Christianity to the marketplace. Peter Maurin insisted that the works of mercy are the most direct form of action there is. The works of mercy are feeding the hungry, giving drink to the thirsty, clothing the naked, sheltering the homeless, visiting the sick, ransoming the prisoner, burying the dead. (Matthew 25)" [Zwick] The artwork of Ade Bethune, a Catholic Worker artist can be seen at the top of our blog's banner. The Well has worked hard to embody this call to taking personal responsibility for the needs of our neighbors. We have learned much from the lives and examples of such concrete faith and action.
Dorothy Day lived out the works of mercy with every fiber of her being and she also beautifully articulated her faith and philosophy through the paper and her many books. She wrote, “The Catholic Worker, as the name implied, was directed to the worker, but we used the word in its broadest sense, meaning those who worked with their hands (to create), or brain, those who did physical, mental, or spiritual work. But we thought primarily of the poor, the disposed, the exploited.” (The Long Loneliness)

As the Communists continued to celebrate May Day the Catholic Church eventually (1955) instituted the feast day of St. Joseph the Worker.  Little is known of St. Joseph other than the fact that he was a carpenter (read construction worker) and did everything he could to provide for his wife Mary and Jesus. This father that works and provides for his family became a symbol of the meaning, the value, and the dignity of work.

Work is a gift. Work is something we were created for. Work produces something. Work involves sacrifice. Work is, as the Benedictines said, prayer. It is sacred.

Work is good and beautiful.
May St. Joseph remind us of this simple beauty today, May 1st, The Feast day of The Worker.
May the Leftist cries for justice remind us also, that work, and more to the point, workers, sacred and precious workers, are often exploited, mistreated, and abused. 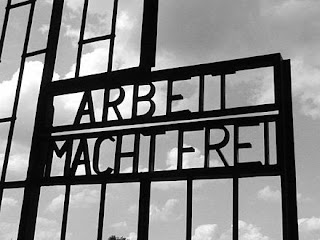 If we are to allow Joseph to stand as the symbol of The Worker, perhaps we can allow the Nazi work camps, where Jews were forced to carry wet sacks of salt back and forth across the compound in a fruitless, empty, mockery of work, to stand as the symbol of evil and oppression at the other archetypal pole. Those poor souls labor endlessly under a banner that read "Arbeit macht frei" which means "Work shall set you free." I'm not sure I've ever known something more deserving of the name blasphemy.
Perhaps we should just close this reflection with a few Quotes. The First is an excerpt from the encyclical written by Pope Leo XIII. The second is a prayer of Caesar Chavez, co-founder of the National Farm Workers Association and civil rights activist.

"it is one thing to have a right to the possession of money and another to have a right to use money as one wills. Private ownership, as we have seen, is the natural right of man, and to exercise that right, especially as members of society, is not only lawful, but absolutely necessary. "It is lawful," says St. Thomas Aquinas, "for a man to hold private property; and it is also necessary for the carrying on of human existence."" But if the question be asked: How must one's possessions be used? - the Church replies without hesitation in the words of the same holy Doctor: "Man should not consider his material possessions as his own, but as common to all, so as to share them without hesitation when others are in need. Whence the Apostle with, ‘Command the rich of this world... to offer with no stint, to apportion largely.’" True, no one is commanded to distribute to others that which is required for his own needs and those of his household; nor even to give away what is reasonably required to keep up becomingly his condition in life, "for no one ought to live other than becomingly." But, when what necessity demands has been supplied, and one's standing fairly taken thought for, it becomes a duty to give to the indigent out of what remains over. "Of that which remaineth, give alms." It is a duty, not of justice (save in extreme cases), but of Christian charity - a duty not enforced by human law. But the laws and judgments of men must yield place to the laws and judgments of Christ the true God, who in many ways urges on His followers the practice of almsgiving - ‘It is more blessed to give than to receive"; and who will count a kindness done or refused to the poor as done or refused to Himself - "As long as you did it to one of My least brethren you did it to Me." To sum up, then, what has been said: Whoever has received from the divine bounty a large share of temporal blessings, whether they be external and material, or gifts of the mind, has received them for the purpose of using them for the perfecting of his own nature, and, at the same time, that he may employ them, as the steward of God's providence, for the benefit of others. "He that hath a talent," said St. Gregory the Great, "let him see that he hide it not; he that hath abundance, let him quicken himself to mercy and generosity; he that hath art and skill, let him do his best to share the use and the utility hereof with his neighbor."


"Show me the sufferings of the most miserable, so I may know my people's plight.
Free me to pray for others, for you are present in every person.
Help me to take responsibility for my own life, so that I can be free at last.
Grant me courage to serve others, for in service there is true life.
Give me honesty and patience, so that I can work with other workers.
Bring forth song and celebration, so that the Spirit will be alive among us.
Let us remember those who have died for justice, for they have given us life.
Help us love even those who hate us, so we can change the world.
Amen."


If my statements about work stirred something in you then you should keep an eye out for a 4 week class I hope to facilitate with a brilliant friend of mine in the near future on both the philosophy and practice of work. If you want to get a taste some of the material click here and sign up to view a seminar on Developing a Philosophy of Work with The Underground that we chopped up into 7 short videos as a course on Teachable.com.

Now honor the workers that have gone before you and get to work. We still have so much to accomplish.

Cherish work and love the poor.
Offer your service and superfluous belongings to those in need.
Do justice, love mercy, walk humbly.
Peace be with you