With Fear and Trembling 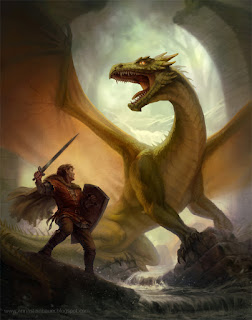 "work out your salvation with fear and trembling"


Last week the Underground Network hosted a seminar called "The Problem with Fear." When I heard that they were planning it I reached out to a few of our leaders and community members who I know struggle with fear. One of those people in particular seems to always struggle with anxiety and fear when facing something new. As I have watched and worked with this person over the years I have seen them crush one challenge after the next. From my vantage point, it seems like they would begin looking back and concluding that all the things that previously intimidated, didn't kill them. Not only that, but they were almost all easily faced after that initial, albeit horrifying leap.

It doesn't seem to work that way though. Each new challenge seems to be an encounter with another monster and no matter how many have been slain before this one, each new monster is seen as monstrous. I have been frustrated in watching this, as I know what this person is capable of. I do remember the former monsters, battles, and challenges that I've watched them face. They are a bit of a formidable monster themselves. "You shouldn't be afraid of this one!" I think to myself. And yet...

Frustrated or not, I cannot overstate how impressed and inspired I am as I see their heroic movement toward what makes them tremble! I stand in awe, and as I watch her be brave I recall the above verse from Philippians, and I tremble.