The Crime of Compassion in Tampa

You have probably already heard all about the 7 Food Not Bombs volunteers that were arrested by the Tampa Police Dept. last Saturday. Whether you heard it from the Reddit AMA thread,  local or even national news sources, it seems that arresting folks for acting compassionately isn't a good look for the city. 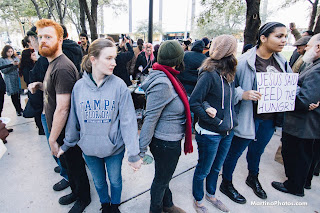 The Well community has been no stranger to the city's hostility toward the homeless and those who would stand with them. With love and commitment for both our neighbors on the streets as well as kindred communities in the work like Food Not Bombs, we joined them Tuesday as they returned to the park for the breakfast they serve there every Tuesday morning. This time they needed supporters to encircle them to both pray for protection as well as be a wall of protection as the police descended on the park once again threatening to arrest those who were feeding the hungry. Eventually the police backed off and no arrests were made on Saturday. Everybody got to eat.

The police are under the executive branch and therefore answer to the mayor who, when speaking about this whole situation said "You can't destroy a neighborhood in order to make your conscience feel better, and that's exactly what's happening."  There is, however, ultimately the question of the actual ordinance being enforced, 16-43(C). Does it apply in this situation? If so, is there a way to have it amended or for an exemption to be made? This is a question for the legislative branch, City Council.

So today A few of us joined our friends with food not bombs at Tampa City Hall to voice our hearts to the council, the ones who can actually vote to change city ordinances. It was not an agenda item so we just spoke during public comment which in turn got it added as special business toward the end of their meeting. We look forward to seeing this conversation continue as city council wrestles with this question.

Below are the comments made Charissa and I:

"When I was a young girl, I remember a sermon my pastor gave that encouraged us to think of our city as our mission field. I drove through downtown Tampa with my parents that evening with that thought in my mind. I remember looking out the window and seeing people sleeping on the streets, and I prayed, "God, help me help the homeless in Tampa." It was a simple, naive prayer, but I meant it. Over a decade since then, I find myself living out that prayer, although now I know that it's not about me helping people, it's about kinship shared and a community of love.

As a young girl I never imagined that it would be my city government that would be the greatest obstacle to compassionate people's efforts to making this city a better, kinder place. As the years pass, though, I'm less and less surprised.

Instead of arresting Food Not Bombs or telling them to do better by changing their location, you should be thanking them for caring for the people you have not cared for. Unless you are going to go out their and give someone a sandwich and sit on the bench they call home and at the very least learn their name, don't punish others for doing so. Often, it is our greatest joy and honor to share food and learn someone's name.
So please, amend the ordinance that is being used against Food Not Bombs and create legislation that protects the compassionate acts of your citizens."

"We began this meeting with an invocation of god. All of the major religions and their myths, if one takes the time to survey them, makes special appeal on behalf of the poor, the hungry, the vulnerable. Often they identify these very poor as ambassors of the gods, sometimes as the very presence of God

These traditions serve as a conscience to our city. Our society has strayed so far from our most noble aims and we have grown very sick. That sickness can be seen in so many ways, through so many symptoms, that it's overwhelmingly obvious. One very clear and tangible symtom of our brokeness as a people is the number of sick, or addicted, or mentally ill, or physically disabled neighbors we leave out in the alleys to fend for themselves. It's open asylum. And if you speak to anyone experiencing that kind of exile you learn of the stress and struggle as death and threat seem to hide around every corner.

And so how do we treat that symptom?
Or even better, how do address the illness of which it is a manifestation?

What would you think of the sick man who just hides and denies every sign of his impending demise? Who acts as though nothing is the matter, though clearly he is falling apart. One could only see foolishness or perhaps a deeper mental sickness.
This is how our city deals with the symptoms of its own illness.
And then when there is a glimmer of health, a light in the darkness, a demonstration of love, compassion, generosity, and humanity, we try to crush it.
We have been doing it for years as we have attacked and attempted to crush every group or organization that has worked directly with the poorest of the poor.
This happening with Food Not Bombs in the park is no anomaly. The police have been running off everyone who tries to offer grace to the most destitute and vulnerable of our neighbors. We say it's about their tables, sometimes it's about health codes, we said our panhandling ban was about safety, we are a foolish sick man making excuses for our derangement.

Just last week a 60 something year old churchman, took a small box of jackets out to share as he knew, with the temperature drops, that they may be needed. He walked around gaslight park to share them. No food, no table, no group, just one neighbor offering goodness to another. He was stopped by police, told he couldn't do that, was ticketed and trespassed from the park, the same park that food not bombs would be arrested in just hours later for sharing food with the hungry.

Love and compassion for the poor is the medicine this city must be prescribed
Yet we seem to respond to it the way movies portray the demon possessed responding to the name of Jesus or a crucifix.

Please, shake off the delusions, the influence and demands of wealth and power, and do your part in seeing our city made whole.

Please help support the work of Food Not Bombs and other charitable groups, families, or individuals that love and serve one another in our city. We all desperately need them and their leadership.

Please do your part with the leadership you have been entrusted.


And here are the word's of our sister Dezeray, one of the FnB members who where arrested last week (also the amazing woman in the above video!)

I'm Dezeray Lyn with Tampa Food Not Bombs- On his fb page, bob buckhorn wrote that the city of Tampa was really shining over the week that we had thousands of guests to our community. I’d say that Tampa HAD a chance to shine, but it wasn’t because of the lavish setup in curtix hixon park and not because the TPD were directed to “clean up downtown” by telling the homeless to “disappear” until the events were over.
What would have made Tampa shine would have been people from all over seeing Tampa residents taking care of one another and acting with compassion and kindness.
But instead, the world got the optics of TPD dragging seven people away from a table where they have served food for years, literally hundreds of times. And I was one of them.
While it was upsetting, given the city’s history, it’s not actually surprising.
The city has wasted critically necessary resources bullying allies to the homeless community, even going so far as to dramatically raid and shut down Homeless Helping Homeless Headquarters after they won a lawsuit challenging the constitutionality of the panhandling ordinance.
In the streets, TPD bully and arrest the homeless (making their chances of finding a job less and less possible) and continually displace them into invisibility.
Last year during two severe storms with flood alerts, while the city had sandbags for residents, they had absolutely no contingency for the homeless enduring the severe conditions and no low intensity shelters set up for them. Tampa Food Not Bombs went out in the early morning hours with hot coffee, ponchos, hot oatmeal and pastries and drove around under bridges and behind buildings finding folks and serving them from our car. And you know what they told us when we found them huddling and fighting to stay dry? They said Tampa resident had already been driving around in their cars throughout the night with hot coffee and sandwiches to make sure that the people in the streets were safe.
That, Bob Buckhorn, is Tampa shining.
This is like the wizard of oz where rather than permits, fees and handcuffs, the city needs a heart, a brain and some courage.
It’s time that the city of Tampa and TPD stop pretending that two small tables in a public park, where our taxes already pay for our usage of the space is what is making this into a problem. The city wanted to hide the issues of hunger and homelessness in our community for a high profile event, that’s how arbitrary the motives are behind all of this hoopla.
The city wants to cherry pick enforcement times of ordinances that by and large don’t apply to us and they ask that we pay for over 100 permits a year to buy some theme park admission ticket to express our humanity and get costly insurance coverage that would divert critically necessary resources away from the community who needs them all just to go to the city who does not.
This is not a business model of the city making life difficult for the suffering and our subsequently feeding them once they are churned out on the other side.
We exist as a challenge to the city.
No one here in our community has ever gotten sick or suffered from a food not bombs share- but thousands ARE suffering and sick from unjust city ordinances, lack of meaningful assistance and resources being diverted away from them as well as an aggressive anti-homeless police force.
If you want to make homelessness disappear, don’t make it a crime to be or to help the homeless. Create housing first initiatives and solve the problem. Thank you.

As the conversation continues in the halls of power, Food Not Bombs will continue their defiant campaign of love and compassion in the streets. They could use your support so consider joining them this Saturday.
Blame this post on Johnny Produce