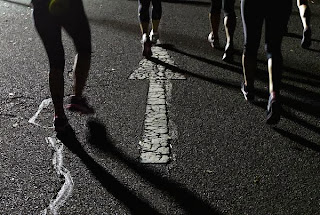 My friend Chynnah is a runner. She is always going running somewhere or returning from running somewhere on Bayshore or around downtown. And there's often a small group of people in tow. That's because she's also a friendly person who loves people. Like, as friendly with strangers as I am cold and standoffish, which is saying something.

There is a decent amount of people on the streets downtown, people who get treated not-so-friendly. Chynnah runs downtown, and she notices this. So she starts slowing down to talk with people who she would pass by. She gets to know their names, their stories, and also their needs. She brings snacks and water with her for her friends. She asks if they need anything so that she can bring it next time she comes by. She always remembers. She offers to pray with them. She is in no hurry, and is as engaged in the conversation as if she has nowhere else in the world she'd rather be, which for her is true.

She invites other friends to come with her. It's better to go out as a pair for safety reasons, especially as a friendly young woman. She refers to her and her companions who reach out where they work out as 'firm believers'. Get it? Sometimes she has other people to go out with her, but sometimes not. She goes anyway, just because the need is there. I try to dissuade her from doing it alone, but she's pretty stubborn. Something is wrong with her, I think.

Something isn't wired in her the way it's supposed to be. We are supposed to be able to ignore others' needs when they get to be too much or too inconvenient, or even dangerous. When the person is too difficult or unpleasant or just different from us, we're supposed to be able to tune out their existence, to not see them. This way we can carry on with our own business in relative peace of mind. For her, the more imposing the need, the more she pays attention to it, or rather to him or to her, the person whose face normal people turn away from. She can't not go to them.

She keeps coming back each week on Thursday nights, but not so much for the run anymore. The people are much more compelling. You see, my friend Chynnah is a runner, but more than that she is a friendly person who loves people. And that is all she needs to do the work of God.